Big Dogs of Tibet and the Himalayas, by Don Messerschmidt 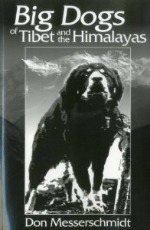 This book is the history lover’s version of John Grogan’s memoir, Marley and Me. Part memoir, part researched history, Big Dogs of Tibet and the Himalayas tracks the large Himalayan dogs, in particular the Tibetan mastiff. From stories of Marco Polo to the author’s visits to breeders in today’s Lhasa, Messerschmidt folds back some surprising layers of truth.

In Big Dogs of Tibet and the Himalayas, Messerschmidt displays the rare ability to combine assiduous research with emotional resonance. An anthropologist, with a PhD from the University of Oregon, the author is an acknowledged expert with years of experience in these breeds. In 1964, while serving as a Peace Corps volunteer in Nepal, he saw his first Tibetan mastiff. Messerschmidt writes that the sighting “was the realization of a long held dream and the beginning of my own studies of these noble dogs.” His love of these great Himalayan dogs comes through in his stories of training his own pets and some of them training him.

Messerschmidt also threads his memoir with historical stories of Westerners’ encounters with these dogs. Each anecdote provokes the reader to rethink the myth of the gigantic mastiff. Tracing back to the time of Marco Polo, Messerschmidt makes a persuasive argument that large Himalayan dogs are victims of what he terms “The Marco Polo effect” — an effect like looking through bubbled glass that has mythologized these dogs to absurdly impossible descriptions of massive size and fierceness.

I experienced the “Marco Polo effect” when I told a friend that Big Dogs of Tibet and the Himalayas gave me a new respect for the Tibetan mastiff. My friend shook her head and said, “Oh no. I don’t like them. They’re as big as bears!” At first thought, this seems like a harmless error, but the author convincingly argues that these tall tales have fueled dubious breeding practices by breeders who are making good money off these myths.

Messerschmidt’s memoir is an enjoyable dog romp through the Himalayas. Big Dogs of Tibet and the Himalayas is a must-read for anyone who loves a good story.