Bill Cameron’s mystery, County Line, came out on June 1st. The wonderful people at Mystery by the Book held a launch party for it on June 2. My husband, Woody, was first in line at the launch party. He’d read Cameron’s Lost Dog, Chasing Smoke and Day One. He knew he was going to want to read County Line as soon as possible.

The hitch in Woody’s plan was that I had dibs on the first read at our house, so that I could get a review into the Colonygram on deadline. So, though he hated to turn it over, the book became mine first.

I read that evening. I brought it to our morning reading time, ignored our newspaper ritual, barely ate breakfast and didn’t even go out to play in my garden despite the rare sunshine. I did take the book out to read in the swing.

By 2 p.m. I handed the book to Woody. “It’s great,” I said. “I’m telling you nothing, so you can enjoy it, too, but I do need it again long enough to get the publisher information for my review.”

Here it is June 5 and I saw Woody sitting in a garden chair reading. This is Woody –the man who never sits still. So, if that doesn’t tell you enough about how good County Line is, I will add a little bit.

In Lost Dog, we met Ruby Jane Whittaker. She is a mystery we won’t forget, one who spots lying and hypocrisy from a distance. We know Skin Kadash, retired cop, professional cynic and purposeful ugly man, has strong feelings and protective instincts for Ruby Jane. These instincts ratchet into high when Ruby leaves town and doesn’t check on Uncommon Cup, her coffee house business for several days.

Not keeping track of Uncommon Cup is way out of character for Ruby Jane. So Skin knows Ruby is in deep doo. The rest is to read.

Let me say that from Lost Dog on, Bill Cameron’s storytelling instincts have been strong. His previous books, set in Portland, ring true for our town and its many out-there characters. In Day One, Cameron created a skateboarding, street-smart Eager Gillespie who was so exciting that Cameron’s fans wanted to see Eager grow, succeed, overcome. What happened to Eager made Cameron realize he could nail youth and attitude.

So, in County Line, we get to meet the younger version of  Ruby Jane —  smart-in-the-mouth, trust-no-one, dunk the basketball from anywhere on the court – that Ruby Jane, the girl who can run forever on County Line Road, and maybe should have kept running.

My only complaint is that Bill Cameron doesn’t write as fast as Woody and I read.

You won’t forget Ruby Jane or Skin Kadash anytime soon, so when Cameron comes out with another in this series, or any series he wants to write, we’ll meet you at the opening launch, ready to buy. 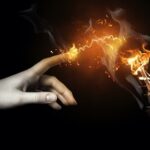