Jim Hardison has worked as a writer, screen writer, animator and film director. He started his professional career by co-writing and producing a low-budget direct-to-video feature film, The Creature from Lake Michigan. Making a bad movie can be a crash course in the essential elements of good character and story, and The Creature From Lake Michigan was a tremendously bad movie. Shifting his focus entirely to animation, Jim joined Will Vinton Studios where he directed animated commercials for M&M’s and episodes of the stop-motion TV series Gary and Mike. While working at Vinton, he also co-wrote the television special Popeye’s Voyage: The Quest for Pappy with actor Paul Reiser. 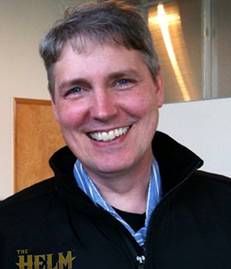 Jim has appeared on NBC’s The Apprentice as an expert advisor on brand characters, developed the characters and wrote the pilot episode for the PBS children’s television series SeeMore’s Playhouse and authored the graphic novel, The Helm, named one of 2010’s top ten Great Graphic Novels for Teens by YALSA, a branch of the American Library Association. These days, Jim is the creative director and co-owner of Character LLC, a company that does story-analysis for brands and entertainment properties. He lives in Portland, Oregon with his lovely wife, two amazing kids, one smart dog and one stupid dog. His epically silly epic fantasy, Fish Wielder, is set for publication by Fiery Seas Publishing in August of 2016.

Join Jim at the Publishing Conference March 5, 2015. He will be sharing his creative and detailed marketing plan he developed with his publisher.  He will present with Vargus Pike on marketing. More Info