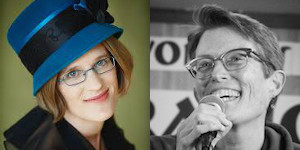 The July Literary Lounge will cover “Everything You Ever Wanted to Know about Publishing and Small Press. Laura Stanfill, publisher at Forest Avenue Press, and Kate Gray, novelist and poet, will discuss the publishing world and the editor/author relationship.

Bring your questions to receive the speakers’ knowledgeable and thoughtful replies.

Enjoy conversation with fellow writers the program, as well as complimentary desserts and beverages.

Tentatively titled Any More, Black Shoe, Kate Gray’s novel-in-progress pits Sylvia Plath against Maureen Buckley, younger sister of William F. Buckley, Jr., in 1953. Kate’s first novel, Carry the Sky (Forest Avenue Press, 2014) stares at bullying without blinking. She is the author of three poetry collections. Her passion comes as a teacher, writing coach, and a volunteer with women inmates and women veterans. She and her partner live in a purple house in Portland with their sidekicks, Rafi and Wasco, two very patient dogs.

Laura Stanfill is a novelist, an editor, a journalist, and the founder and publisher of Forest Avenue Press, winner of an Oregon Literary Fellowship. She founded Forest Avenue in 2012 and published Kate Gray’s debut novel, Carry the Sky, in 2014. Laura is a sought-after speaker on the subject of publishing, including recent appearances at the University of Oregon, Pacific University, Willamette University, the Manzanita Writers’ Series, Corban University, and Willamette Writers. As a community newspaper editor, Laura earned numerous statewide awards for writing and editorial work, including the Consumer Issues Reporting Award from the Oregon Trial Lawyers Association for a series on contractor fraud.