Danuta Pfeiffer announces the publication of her fourth book, a memoir of her colorful life. She tells the story of an unwed teenage mother escaping to the tundra of Alaska; a journalist who became a television evangelist and a wife caught in a web of deceit and substance abuse. 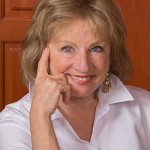 She co-hosted The 700 Club with Pat Robertson and had a ringside view of his campaign for president. After leaving the conservative world of the Christian Broadcast Network, she resumed her broadcast career as a Progressive and hosted several radio talk shows on Air America affiliates.

Pfeiffer says that “Chiseled” explains why she threw off the garb of her evangelical past and discloses a powerful story of a family bound by secrets.

Throughout her life, she says she clung to her Polish father’s legacy, sustained by his tales of fortitude and endurance through the horrors of war. She uncovers long-buried family secrets on a sojourn to the Carpathian Mountains of Poland. Today she is an Oregon winemaker as well as an author.

She begins a national book tour in June.