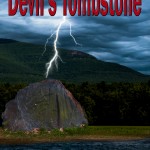 Vancouver author Carolyn J. Rose has just released the third of her Catskill Mountains Mysteries, The Devil’s Tombstone. Rose has lived in the Pacific Northwest for more than 25 years, but grew up in upstate New York and says “the Catskills are always in my heart.” Devil’s Tombstone, set in the tiny community of Hemlock Lake, deals with cold cases, fresh crimes, ghosts and legends.

“The Catskill Mountains are rich in folklore, legends, and tales of the supernatural. Once guided by ghosts, Dan Stone doesn’t disbelieve what can’t be explained. And there’s no logical reason for the patch of blighted ground beside a boulder near Hemlock Lake. Known as the Devil’s Tombstone, the rock marks the spot where, two centuries earlier, a man murdered his young wife and then disappeared.

As Dan digs deeper into the past, he suspects his cold cases are linked to a fresh murder. When hard evidence eludes him, he appeals for help from beyond the grave. As he does, he wonders whether ghosts make their presence felt because we believe in them, or because they believe in us.

The answer may lie at the Devil’s Tombstone.”