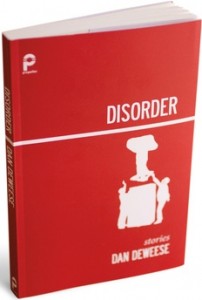 Disorder is exactly the sort of book we had hoped to dig up for our Oregon Book Club members. It’s not something you would find on your own. You won’t see it on the front table of Barnes & Noble. It was written, published, and designed by an Oregon publisher and author without a publicity machine behind him. And yet if you are one of the lucky few who get your hands on it, you’ll find its stories unforgettable.

It’s almost a shame to tell you what to expect from Disorder because DeWeese does such a good job of never telling you himself. In “Continuity” a man returns over and over to a paint store, unable to get the paint color right for a room he’s painting for his son. But in his brief exchanges with the paint store’s manager and customers, the man changes his story in small ways. It’s not even something the reader notices until the end, when the man gets angry, storming out of the paint store because he hasn’t been listened to.

Not since Hemingway’s classic short story “Hills Like White Elephants” have I met an author so skilled at revealing the things our conversations hide. Between the lines of DeWeese’s stories are entire novels—busted relationships, custody battles, children lost—but DeWeese only gives us the aftermath, the banter of the victims at a paint store.

The Oregon Book Club exposes OWC members to unheralded Oregon writers. We mail a newly published book four times a year. If you’re not yet a member, there are a few days left until we ship Disorder. If you would like to join, please visit the Membership page. If you’re curious, read more about the Oregon Book Club.