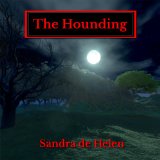 Sandra de Helen will be reading from the first Shirley Combs/Dr. Mary Watson book, “The Hounding” at 7 p.m. Thursday, Aug. 13 at Another Read Through, 3932 N. Mississippi Ave.

“Tall, thin, androgynous Shirley Combs considers herself the world’s greatest living detective because she uses the methods and casebook of Sherlock Holmes to solve crimes of the gentry of the American city most closely resembling London, England — in terms of the weather, at least. Sidekick/narrator Dr. Mary Watson both delights in and is frustrated by her partner’s behavioral resemblance to Sherlock. Combs is unemotional, analytical, and given to pacing through the night in the streets of the almost perfectly livable city of Portland, Oregon.”

Sandra says both books of the series will be available as well as the mystery anthology, “Lesbians on the Loose,” and her poetry chapbook, “All This Remains to be Discovered.”